Cinderford Town Under 12s continued their impressive league campaign with a 3-0 win over high flying Hucclecote.  This was only Cinderford’s second league game of 2015 after a run of cup fixtures and in that time Hucclecote had leapfrogged Cinderford in to 2nd place although we have 4 games in hand.  This made the game more important and the side didn’t disappoint with a 3-0 victory to move back up to second.

With keeper Kyran Edwards ill a reshuffle was needed and Joe D’Amragio took over goalkeeping duties in the first half, although rarely troubled he did all the basics well and produced an excellent save to deny Hucclecote’s only shot on target in the half.

Cinderford took the lead midway through the first half follow some good attacking football, Brandon Donnelly playing the ball high to the edge of the area and Josh Horrobin producing a great header to put the ball into the path of striker Taylor Blaby who rarely misses in those situations. 1-0.

Before long it was 2-0 as striker Brandon Donnelly found himself free in the box and controlled his half volley perfectly into the bottom of the net.

At half time defender Josh Creed took over the goalkeeping duties and Joe D’Ambragio was moved to the right wing and immediately made it 3-0 after being released down the right.  His low shot was half stopped by the keeper but he couldn’t get enough on the ball to keep it out.

Cinderford continued to play some good football, Isaac Phelps and Jack Bufton were both superb in defence and Finn Jones his usual all action self controlling the middle of the pitch.  Hucclecote continued to battle and had a couple of chances in the second half but nothing to trouble Josh Creed in goal.

Cinderford had several chances with Brandon Barnett’s superb set piece delivery causing plenty of problems, but they just couldn’t get a fourth.

Man of the match went to defender Jack Bufton who was solid in the tackle and excellent and playing out from the back. 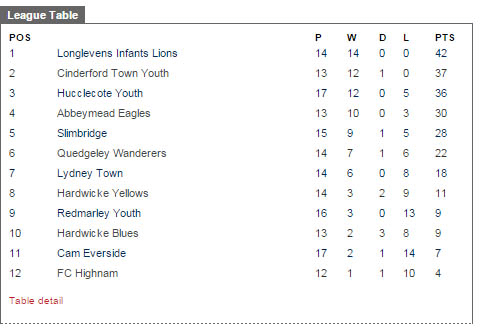