Cinderford Town Under 10s just fell short in their cup final vs Minchinhampton Rangers going down 3-1 at the end of a hard fought game.

Cinderford took the lead mid way through the first half when a flick on by Charlie Taylor released Liam Wilkins who volleyed the ball home.  Minchinhampton levelled soon after when goalkeeper Callum Phillips made a great save to deny their striker only for the ball to rebound in to the arms of Logan Donnelly, the referee instantly awarding a penalty.

The second half continued in much the same vein with both teams going for the win and both keepers in great form.  Minchinhampton then took the lead with around 5 minutes to go with a good header from a corner.

Cinderford were now chasing the game and forced the Minchinhampton keeper in to several great saves, twice denying Liam Wilkins, saving a Ryley Cocker freekick and producing an incredible save to keep out a long range effort from Theo Crompton, tipping the ball around the post.  From the resulting corner Michinhampton broke quickly and were 2v1 with the Cinderford defence before finishing well to kill off the game.

Cinderford continued to press to get back into the game, now with 4 strikers on the pitch but a combination of excellent defending and strong goalkeeping meant they were unable to find a way through.

Well done to all the players for the amount of effort shown in a good game of football, reaching the final two years on the trot is a great achievement. 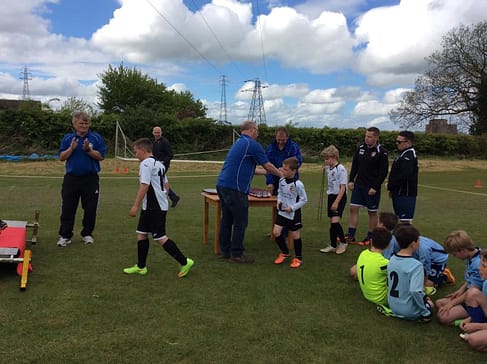