Well done to our Under 10 Colts team who won the Under 10 section of the Broadwell tournament this weekend.  Performing well throughout the tournament the Colts side came up against our other under 10 team in the final which they eventually won on penalties.

Great credit must go to the Under 10 coaches Brian Burke (Colts), Mark Brain and Steve Blaby for the progress the Under 10s have made in such a small space of time, this time last year we have around 8-9 Under 10 players and in a short space of time we’ve managed to get two competitive Under 10 teams up and running.

Now is the time to start looking forward to moving up to Under 11s next season, we are aiming to run two Under 11 sides again next season and are currently looking for new players for the new 9v9 format.  Open training starts on June 22nd, if you have a child in school year 5 (moving to year 6 in September) interested in playing for us next season please click here for all the information. 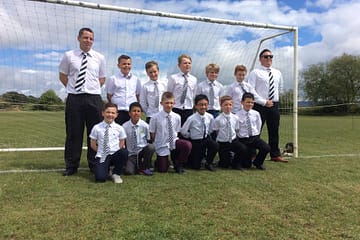 Our Under 10s are in cup final action this Sunday as they take on Minchinhampton Rangers in the Severnvale Services Shield final. The side were beaten finalist last season and will be aiming to go Read more…

Under 10s reach their second final in two years

Congratulations to the Under 10s who put in a great performance to overcome Cam Everside in the cup semi final this weekend.  In a tight game that went all the way to penalties every Cinderford Read more…