Under 10s Finish Runner’s Up

Cinderford Town Under 10s have been confirmed as runner’s up in their league pipping King Stanley to 2nd place on goal difference.  A massive well done to the side who 12 months ago had only played one friendly together and have been regularly playing against sides who’ve been together for years.

Cinderford will now feature on the Mid Glos Champion Day at Frampton-on-Severn on May 18th. 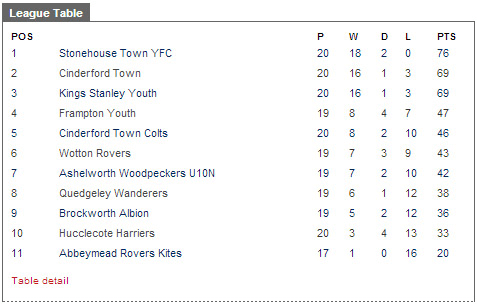 Cinderford Town Under 10 Colts currently sit in 5th position having finished all their games, Wotton Rovers can potentially overtake the Colts if they win their game in hand against Frampton.  Again, for a side who were put together  in September and got late entry to the league this was a great achievement.

Both sides should be hugely proud of their success this year and it bodes well for next season.

Our Under 10s are in cup final action this Sunday as they take on Minchinhampton Rangers in the Severnvale Services Shield final. The side were beaten finalist last season and will be aiming to go Read more…

Under 10s reach their second final in two years

Congratulations to the Under 10s who put in a great performance to overcome Cam Everside in the cup semi final this weekend.  In a tight game that went all the way to penalties every Cinderford Read more…