We’d like to say a big congratulations to our Under 11s and Under 9 Colts who have both made it through to league cup finals this season after some great perfomances in their semi final matches recently.

The Under 11s have made it 3 cup finals in 3 years and have the admirable record of reaching a cup final every year they’ve been in the league. Unfortunately they’ve lost the last 2 finals so will be hoping to make it 3rd time lucky when they face Minchinhampton on Saturday April 23rd. 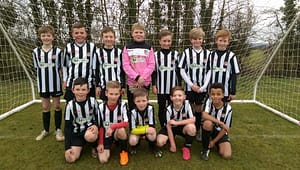 The Under 9 Colts put on a great performance in their semi final with a 3-2 win over Wotton Rovers. Having been losing 1-0 and then 2-1 the side showed great determination and produced a sensational second half of football to turn the game around. Goals from Declan Edwards, Kealan Freeman-Price and Jamie Creed putting the side through against a Wotton side who’d knocked the team out at the same stage last season.

The Under 9 Colts will now face Cam Everside in the final on April 23rd.