Matt Crabb struck his first goal for the with a beauty early in the match, that lead soon became 3 as a quick fire double from captain Finley Jones give the side a comfortable cushion.  Towards the end of the half a long range effort from Luca Smith sailed into the net, although originally given as a goal kick by the referee as the ball went through the net, a quick intervention from the linesman ensured the goal stood.

A spirited performance from Gotherington in the 2nd half ensured that it became more competitive although a 2nd goal from Matt Crabb and a Taylor Blaby strike ensured a 6-0 win and a good days work for the 13s. 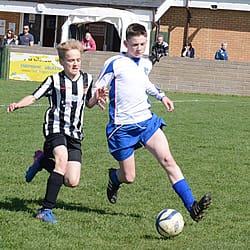