Congratulations to the Under 13s who made it a double trophy season last night by securing the Cheltenham Youth League Division 1 title with a 1-0 win over Leckhampton Rovers.

The Under 13s lost their first game of the season but since then went on an incredible unbeaten run to finish the season level on points with Leckhampton to force a play off match.

A Fin Jones goal in the play off match last night secured the title with a 1-0 victory and to add another trophy to their successful season after winning the Cheltenham League Plate final in April.

Well done to all players and to the coaches for their performances this season. 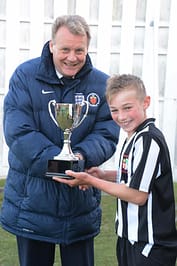