Congratulations to the Under 12s who came from behind to win a thrilling Cheltenham Youth League plate final yesterday against Churchdown Panthers.

Despite a lot of early Cinderford pressure Churchdown took the lead against the run of play when a through ball presented an opportunity for their quick striker to take the lead.  The lead didn’t last long though as Liam Wilkins struck to level the scores, spotting the keeper off his line and finding the corner of the net from a tight angle.  On a small pitch the game descended into a battle with very little space for either side, Churchdown taking the lead for the second time after some good control and finish from their substitute.  Liam made way for Charlie Bevan with 10 minutes remaining in the first half and he had an instant impact, firing beyond the keeper to level the scores with his first touch.

The second half continued in much the same way, with lots of the ball in the middle of the pitch and space at a premium the match seemed to be heading for penalties when with 10 seconds of normal time remaining the ball dropped to Joel Morse who struck from a good 20 yards out over the keeper and into the net to give Cinderford the title.

It was also confirmed yesterday that the Under 12s finished runners up in the race for the Division 2 title and gained promotion to Division 1. 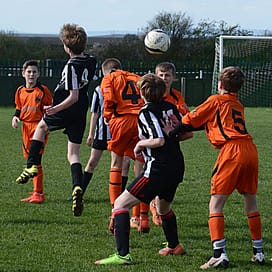