Cinderford Town Under 11 Colts picked up their 2nd consecutive win to take the side up to 3rd place in the league with a dominant display against Wotton Rovers at Katherine Berkley School on Saturday.

Starting with the same 7 as last game after their win at Broadwell the team was Tom Phipps in goal, Holly Brown and Oliver Stamp-Dunstan in defence, Aaron Singleton left, Harry Wilkins right and Harvey Edwards in the middle and Jason Heephy up front.  Jake Wassell being joined by under 10 striker Liam Wilkins on the bench.

The Colts started in a dominant but wasteful fashion creating several one on one opportunities which they just couldn’t take advantage of.  Finally they broke the deadlock after 10 minutes when Jason Heephy picked the ball up outside the box, beat the defender before firing high in to the net.  Minutes later it was 2-0 in very similar circumstances when the ball was played through and both Jason and Harry went to the ball, Jason stepped aside and Harry Wilkins hit the ball high into the net.  Jake Wassell then replacing Harry Wilkins on the right.

Now in total control and Harvey Edwards having an excellent game in the middle of the pitch, the Colts created several more opportunities and won a series of corners which came to nothing, the Wotton keeper doing well on several occasions.  Just before half time Aaron Singleton picked the ball up on the left hand side before beating the defender and getting his shot away, the Wotton keeper may feel he should have done better after spilling the ball into the net.

At half time Liam Wilkins replaced Aaron on the left wing and the Colts domination continued.  With Jake’s ability in the air and Liam putting some quality corners in Wotton were having to scramble to keep the ball out of the net.

Midway through the second half and it was 4-0, Liam Wilkins winning the ball at left back and running the length of the pitch beating 3 players before smashing the ball past the keeper.  The whole side were now pushing forward with Holly Brown going close several times bringing 3 or 4 excellent saves from the keeper as well as striking the bar with a rocket shot.

With 10 minutes to go it was 5 as Aaron Singleton picked the ball up in the middle of the pitch and drove into the box before finished low into the corner.

Several more chances came and went and the Colts will be disappointed that they didn’t add to the total but overall the team came away very happy with an excellent performance and a clean sheet.

Wotton Rovers coach gave Liam Wilkins man of the match although there were some excellent performances from other players. 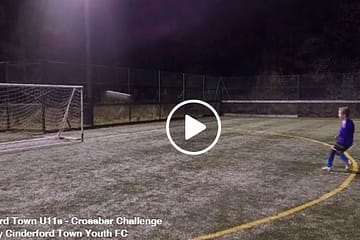 Under 11s take on the “Crossbar Challenge”

The Under 11s took on the crossbar challenge at training last night, watch below to see how they got on…

Under 11s Runners up @ Broadwell

Congratulations to the under 11s who finished runners up in the Broadwell tournament last weekend. Having gone the tournament without losing a game they went on to beat Longlevens Lions in the semi final to setup Read more…

Under 11s Runners up at GYAFL Tournament

The under 11s put in another great display at the Gloucester Youth League tournament yesterday but unfortunately once again finished as runners up to Longlevens Lions, going down 2-0 in the final. The side have Read more…